It seems this word, permission, puts a bad taste in peoples’ mouths these days.

We were recently told of some folks that had trespassers on their property. These folks did not ask permission to be on that property. A post on social media about them being there (the owners did not know who it was) brought such as onslaught of negative remarks to the landowners, the post was removed.

“They have a right to be there.”

“People can go where they want.”

“You have no business owning so much land.”

The property is used for hunting so the owners were concerned for the safety of those trespassers. Is it because asking permission puts one in a humble position?

A man’s pride will bring him low,

But the humble in spirit will retain honor. 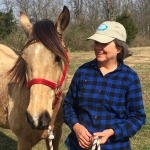