Whatever our Mother embarked on she went full steam ahead.  She intently pressed onward towards her next idea, vision or goal.  That vision after the river trips were miniature horses.  Griz loved the idea, and always had carrots in his pockets for ‘the little dudes’, as he always called them. 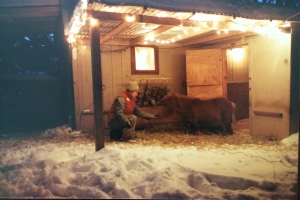 Griz made the shed into a cute mini barn.

Her twin sister, our Auntie Bliss, had a few years earlier, discovered the joys of

This is Crimson and her foal, BR (Boomerang). This author is now the proud owner of BR, who is now a great little senior citizen of 26 years old.

miniature horses.  Mom and Griz visited her place several times in New Hampshire.  There, they too, caught the joy of mini’s.  Not missing a beat, she and Griz began preparing their home at  13021 in Maryland for two mini broodmares and the beginnings of their next adventure together.  Our Mother always called herself a ‘tag-along’ behind Auntie Bliss and so appropriately named their farm, Tag-Along Farm Miniature Horses. 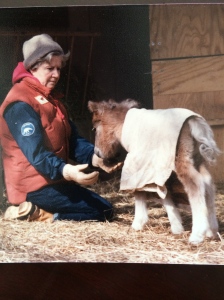 These little foals were so adorable.

Their Maryland home was deftly transformed by Griz’s skilled hands into a happy miniature horse farm.  The back yard became the pasture for the mini’s, and the training arena for the foals that would soon arrive.  A shed was purchased and configured into a cute miniature horse barn.  They were off!  Unlike Auntie Bliss, who owned mini’s for pleasure, Mom and Griz turned their farm into a business.

Professional miniature horse magazines began appearing on the coffee table.  Mini horse supplies were everywhere!  A throng of new friends entered their lives.  All enthusiastic mini horse owners, trainers, and showmen.  Everything was so little after a life-time of big horses.  At first we poked a lot of fun at them, with their little horses and the little shows she and Griz and all their new friends went to.  They even hauled their mini’s inside a van, where Griz fashioned two ‘stalls’ for hauling them to shows! 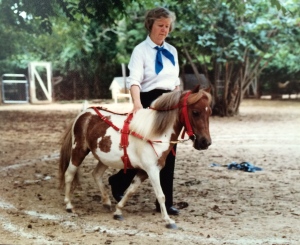 This is Georgia, our Mothers’ prize show mare.

But he who laughs last laughs best, as once again our Mother showed us the power of fearless determination, vision, grace to learn from others and generosity go a long, long way.  She had forged yet another path we children could follow. 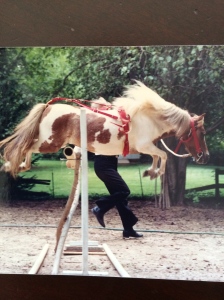 Georgia could jump higher than she was tall. She won many ribbons for Tag-Along Farm.

Spooky was her prize gelding. He won many Championship ribbons.

BR was a foal from her mare. He is a perfect mini size and conformation. Making him not only one of her two breeding stallions, but also her gold mining partner in her costume classes!

Spooky was also a terrific mini to drive.

A mini is a little horse with a big horse mind! What size difference?

Georgia knows she’ll be getting a treat from Griz after she gives the kids a ride!