We admire our daughter. She is a young lady of great faith. It did seem like a huge leap of faith though when she came home one evening several weeks ago and announced she had volunteered her horse to participate in the Resurrection musical she was performing in at a big, local church.

The Winchester Community Choir, of which she is a part, was working on an Easter Resurrection musical. The director wanted live animals to be a part of it as well. Goats, a camel, a donkey, and a horse. All inside church! It was the horses job to come into the foyer where ‘Jesus’ would get on and ride down the aisle packed with people towards the stage full of singers, lights, camera, action!

It sounded so exciting and we were wanting to be a part of it. We know our horses though, and sadly told our daughter it would not work. She listened to the reasons and saw that there would need to be more training to “bomb proof” her horse from all those sights, sounds and activities so unfamiliar to him. A parade horse! That would work for they are accustomed to much noise and activity.

A parade horse they found! The camel was unable to participate because of a hurt foot and a donkey was not found. But there were several big and little goats all around! 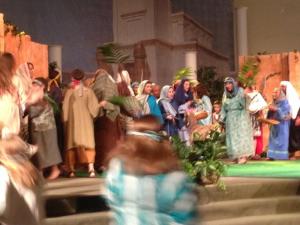 There were big and little goats all around.

We went to the Saturday evening, April 12, 2014, performance of “The Power of His Love–Changing Lives for Eternity” at Victory Church in Winchester, Virginia. It was outstanding. With over one hundred in the cast (young and old), powerful songs, beautiful singing, great stage props, goats and one terrific horse. We were impressed from start to finish.

After the performance, we went directly out to find the horse. She was standing quietly with her owner by their stock trailer. The owner was as quiet and polite as her horse. It is true–a quiet handler makes a quiet horse. The horse, whose name is Hope, was a 12 year-old foundation Quarter horse “from out west” her owner told us. Swarms of admirers came to look at and pet her. She was a pretty paint (red and white) with a moon eye, probably about 15.2 hands.

We learned much from observing that lady with her horse and from our daughter. Trust, quietness, work and faith go a long way.

It was thrilling to see ‘Jesus’ ride in on a horse:

“Now I saw heaven opened, and behold, a white horse. And He who sat on him was called Faithful and True…”
Revelation 19:11

“…and He who sat on him was called Faithful and True…”

Happy, Blessed Easter to you! He is Risen!

A Farm Wife’s Life ~Tackling each day with a little grace, a lot of grit and a ton of Jesus