It is hard to enjoy a good, cold drink of water when it is frozen.  This is especially problematic for the birds.  We feed the them year ’round out here at Blue Rock Horses & Farm.  It is a well known fact that this PFO (Primary Farm Operator) is not happy unless she is feeding something!  The idea of another electrical cord running over the frozen ground is not very appealing though, so it has not been done.  It has been so cold that the floating heaters keep only a part of the water thawed.  The heaters in the bottom on our tanks do a better job.  This is FAR from a complaint though.  Years and years ago when I was the kid of the PFO (my mom), I had to break ice daily and wrap pipes with heated wires to keep them from freezing!  Times, they have gotten better at least in this regard.

Sometimes the floating heaters keep only part of the water thawed.

However, a little discovery was made quite by accident while out feeding this freezing 12^ morning .  Our water troughs tend to get lower than usual when it is so bitter cold outside.  Who wants to stand in the freezing weather waiting for icy water to fill the trough?   The trough in the Littles’ paddock was too low and needed filling—ugh.  Here is the scenario;  run to put hose is trough; run to turn it on;  hurry! hurry! to be sure hose is in trough and not pouring out to freeze all over ground (sometimes they pop out of trough when water is turned on); run back to unhook and drain hose as quickly as possible before water freezes inside the hose itself.Whew!  Job done, hopefully it will be warmer in next couple days.  If not, the heated trough itself has thawed many a hoses—just drop it in for a couple hours!

A little Titmouse was on the rim taking a sip!

Something caught the corner of my eye as I was working around the barn.  I realized it was a little Titmouse that had quickly noticed the full trough and was more than happy to oblige its’ offer of water.  Unfortunately camera was not in hand.

Now this PFO has to be more careful to keep the water full to the rim, so the little birdies may come and have a satisfying sip!  Another little job here at the farm… 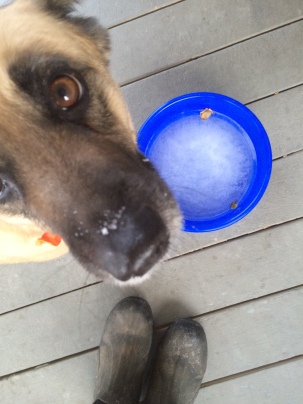 You, Whoopie-pie, will have to come inside for your water!